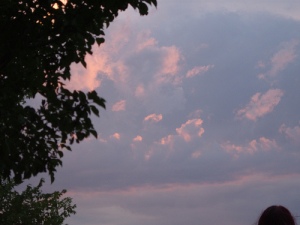 So, things have been hectic to say the least.  Our divorce was final on July 5th.  And I took him to the airport on the 6th – so he could take off to Mexico and be with the one he claims to love.  How crazy is that!?!?  Most people think I’m nuts for doing that.  But my reasoning is that I could then know 100% where my son was when the ‘ex’ was leaving the country.  I wish I could say I trust him to do the right thing when it comes to our son….but honestly, I don’t know who he is anymore.  His own family and coworkers say the same thing.  No one knows how one person could possibly change so completely.  How can one’s personality completely change practically over night?

It’s pretty sad.  As mentioned in numerous posts, I hate that we couldn’t make it work.  But more than that – if we couldn’t succeed….I was hoping that we could be on friendly terms for our son’s sake.  And so far, I believe my son has not felt any ill feelings or animosity between us.  HOWEVER….I’m not sure how long I can take the hidden agendas and secrets and back-stabbing that comes from his father.  He is really good at manipulating people.  He plays mind-games.  And if you aren’t careful, you get caught up in it before you know it!

I could go on and on about all of the manipulation he’s attempted lately….but I’ve decided to move on and I don’t care to rehash it.  I can say however, that I truly believed that I had forgiven him…but after some things I’ve discovered recently (some of which proves that he was in this relationship PRIOR to his leaving – as I suspected and he denied)….I am going to have to work on the forgiveness again.  Because right now, I’m pissed.

I have also decided to take charge of my life in other areas too.  For as many years as I can remember, I’ve allowed my life to revolve around men.  All I’ve ever wanted was to be loved and wanted by a man.  This doesn’t mean that I can’t stand on my own two feet….because I can.  I have in the past and can again.  But I prefer to be in a relationship.  However, because of this way of thinking – I depended too much on man to complete my world.  To make me happy.  To feel loved and worthy.  And, of course, I’ve been let down greatly because let’s face it – we humans are…..human.

I don’t know if it’s all of the stress I’ve been under for so long or the ‘fibro-fog’ or peri-menopause that has my brain barely functioning any more.  But I do good to make it through the day anymore.  My mind is so scattered.  Forget about reading.  Or praying most days.  It’s not on purpose…..I just can’t slow down….or when I do, I fall asleep.  Part of it is that I just can’t bring myself to think too deeply for too long.  I guess I’m afraid that I might have to deal with some issues or emotions that I just don’t think I can handle right now.  Does that make sense?

This has led me to consider making a few more changes in my life.  My job for one.  I have come to the conclusion that I need a change.  If I simply processed paperwork – it wouldn’t be so bad.  But, because I also have to deal with everyone complaining and whining….it’s gotten really old.  I do not believe I’ve ever seen so many ugly, hateful acting people in my life!  For a place where we are supposed to have a heart for others….there sure is a lot of backstabbing and lying and outright deceit.  Oh don’t get me wrong…I understand that this goes on in most places.  But not to this extent, believe me!

Then when you add that somewhere, somehow the employees feel entitled to have everything their way and immediately.  They do not feel accountable for anything and they don’t care about their responsibilities.  It definitely makes you dread going to work.

So, I find myself thinking about other employment these days.  Problem is….I don’t have a college degree.  I have a couple of certificates of completion….but no actual degree.  Yes, I could go back to school….but again, I don’t think my brain and my stress limit will allow for this.  The other problem is pay.  When I look around at what people are being paid…..I feel I better stay where I’m at for now.  I guess you could say that I’ve kind of worked myself into a corner and can find no way out just yet.

The other is my daughter.  I love, love, love her.  And she has been a great kid.  I’m proud of her.  However, she’s been going through some stuff of her own.  I believe that my divorce was the breaking point for her.  He and she got along great in the beginning….but as the years passed by, it became more strained until it was complete bitterness.  He played mind games with her too many times.  He hurt her greatly.  BUT – bottom line was that he was her ‘dad’ when her own dad was nowhere to be found all her life.

So, when we split up….she became very angry. She was/is constantly mad at everyone around.  No one can do right by her.  She became the most hateful and hurtful person to me…..I’ve never experienced anything like it.  And most times, I simply sat there stunned and looked at her because I had no idea who she was anymore.  She and I were always close and could talk about anything….but that is no more.  I was to the point of telling her to pack her things and move out (she’s almost 19 now).

She then decided to go ahead with her plans for school (after taking a year off).  However, she needs me to pay for part of it because her scholarship and grants won’t pay for it all.  I agreed to help her on one condition – and that is she has to seek counseling to work through the anger and whatever else she is experiencing.  She agreed.

So here we are.  I have decided to take no more bull from the ‘ex’, the angry daughter and/or the folks at work who seek to make life miserable for everyone around them.  Don’t bother….I won’t accept being walked on any longer!

I’m also considering a move.  I like small towns.  I’m sick of the big ones.  I don’t need to live where there are nightclubs etc.  I want peaceful.  I want simple.  Less stress.  I want friendly faces that you recognize.    And I want water (we are all running out of water due to the drought in this area).  I now have to find one where I can make a living….

So like I said in the title….Life Goes On…..and I will continue…..and I will strive for happiness and contentment…..and guess what?  I WILL SUCCEED~!!!