THROUGH A CHILD’S EYES 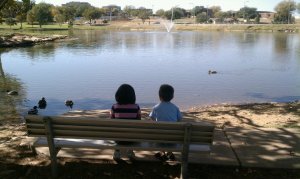 When my daughter was young, I worked full-time as a single mother.  My mom would pick her up from school.  When I got off, I would go to my parents’ house and we would all have dinner together before taking her home.  During those times – my dad always had milk with his evening meal.  So my daughter followed suit and would do the same because he was the father figure in her life and she wanted to be just like him.
Out of the clear blue, when she was about 5 or 6, she started refusing to drink milk.  After several evenings of this – I asked her why she quit drinking milk.  She informs me that we were always telling her to drink her milk because it would help make her big and strong (I know, I know…but that is what used to be said about milk).  And lately, we had been commenting that she was growing up so fast (you know how adults do)…..so, she connected the two and stopped drinking milk in order to slow down the growth process!
Needless to say we got a good chuckle out of the situation.  And of course we corrected the misunderstanding.
Fast forward to my 8-year old son.  He had to start wearing glasses last year – his first pair.  This year, we went for his check-up and discovered that he needed a new prescription.  We ended up going to a place that offered buy-one, get-one-free.  When we got home, he asked me what we were going to do with his old pair.  I casually mentioned that we would probably donate them – because there are places that will take them and help a child whose parents can’t afford to buy glasses for them.
A couple of weeks later, I get a call at work from the school nurse.  She tells me that my son had given his extra pair of glasses to a little boy – who didn’t even need glasses.  She tells me that the glasses are pretty much beyond repair.  I tell her to send them home and I would see what insurance would cover.
I got off of the phone stunned.  After all, I had noticed him wearing the 2nd pair of glasses and had even commented on it.  And he didn’t say a word.  And it was unlike him to do such a thing without asking first.
When I got home, I inquired about what had happened.  Come to find out – my son was showing his friends his new glasses – and a little boy said he needed glasses but his parents wouldn’t get him any.  And, my giant-hearted son remembered that comment I made about donating…..   So, he actually donated his OLD pair of glasses, not his new ones like everyone thought.  Of course he didn’t realize that one has to have the right prescription, etc.  But his heart was in the right place!
Comments that we think is very clear and simple – are not so when in comes to how our children interpret them  There is no being sarcastic with children….they don’t get it.  What you say is fact.  It’s black and white, no gray.
Therefore, if you have children/grandchildren – slow down.  Take time with them.  Take time to explain things….to show them exactly what you mean.  Take time to love them.